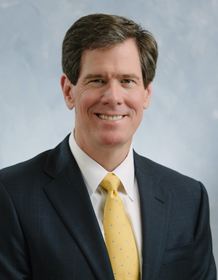 Mr. Kneen served as Executive Vice President and Chief Financial Officer at Tidewater since November 2018 following its acquisition of GulfMark Offshore where he served as President and Chief Executive Officer since June 2013.  Mr. Kneen joined GulfMark in June 2008 as the Vice President – Finance and was named Senior Vice President – Finance and Administration in December 2008.  He was subsequently appointed as the Company’s Executive Vice President and Chief Financial Officer in June 2009 where he worked until his appointment as Chief Executive Officer.  Previously, he was Vice President-Finance & Investor Relations for Grant Prideco, Inc., serving in executive finance positions at Grant Prideco since June 2003.  Prior to joining Grant Prideco, Mr. Kneen held executive finance positions at Azurix Corp. and was an Audit Manager with the Houston office of Price Waterhouse LLP.  He holds an M.B.A. from Rice University and a B.B.A. in Accounting from Texas A&M University, and is a Certified Public Accountant and a Chartered Financial Analyst.

All presentations by Quintin Kneen

The Tidewater/GulfMark Consolidation And Merger