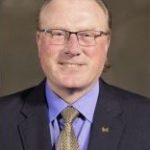 John Cross is a native of Laurel, Mississippi and earned his Bachelor of Science Degree in geology in 1987 from the University of Southern Mississippi. He received a Masters of Business Administration in 1998 from the University of Central Texas and a Masters of Strategic Studies in 2010 from the US Army War College. His military education includes the Engineer Officer Basic and Advanced Courses, the Command and General Staff College at Fort Leavenworth, Kansas, and the US Army War College at Carlisle Barracks, Pennsylvania.

John Cross began his career as an engineer platoon leader in Germany and later served as a company executive officer. After attending the Engineer Captain’s Advanced Course, he moved to Fort Polk, Louisiana and deployed to Desert Storm serving as an assistant battalion operations officer. Following the war, he commanded an engineer company at Fort Polk, Louisiana and Fort Hood, Texas. He was selected for the Army’s Training with Industry Program where he worked for the Environmental Protection Agency (EPA) in Denver, Colorado. His focus during this time included compliance with State and Federal regulations and environmental restoration at Superfund sites and Formerly Used Defense Sites (FUDS) in an eight state area. After working with the EPA in Denver, John Cross was assigned to the Corps of Engineers Fort Worth District with duty at Fort Hood, Texas. As part of his tour with the District, he served as a project officer at Brooks Air Force Base in San Antonio, Texas supervising Military Construction.

He attended the Army’s Command and General Staff College and served again at Fort Hood as a battalion operations officer and executive officer. After a tour in Stuttgart, Germany, he was selected for command of the Brigade Special Troops Battalion in 1st Brigade, 4th Infantry Division at Fort Hood. He deployed the battalion to Iraq in 2006 and operated north of Baghdad. After command, he was selected to lead the engineer training team at the Army’s National Training Center at Fort Irwin, California where he trained battalions before they deployed to combat in Iraq and Afghanistan.

After graduating from the War College in 2010, he was assigned to Fort Bragg, North Carolina where he served as the XVIII Airborne Corps Engineer and deployed with the Corps to Iraq. In Iraq, he served as the Deputy Engineer to United States Forces Iraq and was responsible for the final disposition of over 80 bases and attendant infrastructure housing 50 thousand soldiers as well as the construction of facilities for the Department of State.

He served as the Vicksburg District Commander from 2013 – 2016 and retired with 30 years of active duty service in October 2016.

Since 2018, John Cross has been working as the USACE Vicksburg District project manager for ARMOR 1 – the replacement for the Mat Sinking Unit.