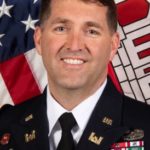 COL Stephen Murphy is the 64th commander of the New Orleans District, U.S. Army Corps of Engineers (USACE). COL Murphy’s Army career began in 1997 when he received his commission as an engineer officer from the Illinois Institute of Technology. Over the last 24 years he has served at all echelons within the Army, to include assignments with Armored, Stryker, Airborne, and Special Operations units, as well as in the interagency in Washington D.C. No stranger to USACE, COL Murphy commanded the Nashville District from 2015 to 2017 where he delivered a civil works program estimated at $290 million dollars annually with a focus on navigation, hydropower, and flood risk management. In New Orleans, COL Murphy is now responsible for delivering a $3.2 billion dollar civil works program, one of the largest civil works programs in USACE, focused on flood risk management, disaster response, ecosystem restoration, and a navigation program responsible for ensuring safe and efficient navigation on the Mississippi River and Gulf Intercoastal Waterway (the first and third busiest waterways in the nation, respectively) and access to five of the top 15 busiest ports in the nation. COL Murphy has deployed to Iraq and Afghanistan four times in support of combat operations, to Bosnia in support of peacekeeping operations, and on humanitarian assistance missions in the United States to fight forest fires in Montana and provide hurricane relief to New Orleans following Hurricane Katrina. COL Murphy graduated from the U.S. Army War College in 2019. Prior to that he served as the Command Engineer for the Joint Special Operations Command at Fort Bragg, North Carolina.

COL Murphy has earned the Ranger tab, the Sapper tab, the Master Parachutist Badge, and the Combat Action Badge, and is a recipient of the Army Engineer Association’s Bronze De Fleury Medal.

COL Murphy is a native of Greenville, South Carolina, and has been happily married to the former Nicole Lyda, also from South Carolina, for over 20 years. Together they have been blessed with two teenage children, Will and Claire.

What it Takes to Deepen the Mississippi River