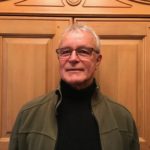 Bob Clark, is a partner in MetalCraft Marine. He joined MetalCraft in the summer of 1991. He previously was a partner in the family furniture business. Bob quickly realized that MetalCraft had brilliant design talent in his partner Tom Wroe. The company had four employees and Bob & Tom. Bob did the accounting, selling, marketing, book keeping, swept the floor and trialed and cleaned the boats before shipping. In the first year which was deep in recession, he doubled sales and they doubled the number of employees.

After using the New Orleans Workboat Show to study the market, Bob saw the market was much larger than he thought. He saw the Government market as the most stable, so he studied the CFARs and DFARs to fully understand the requirements that would be arduous for any small Canadian Company.

His first attempt at bidding in the US was in 1994, for a Federal Gov’t tender for a large landing craft for Biscayne Bay National Park. MetalCraft won that first bid and the boat was a great success and is still in service today. They sold many more to the USNPS and the Park Service became their largest customer.

In 1998 MetalCraft bid their first US Navy and USCG contracts. In both cases the effort was intended as a practice round to test their capabilities against the best in the industry. MetalCraft won both those bids and the boats were extremely successful, which led to several more contracts of the same vessels for both agencies. Clark believes that the Navy and CG inspectors have contributed greatly to the Company’s development through their high standards and rigorous requirements.

In 2002 the Company designed and built the first high speed, highest pumping fireboat in the world, the FireStorm was born. The Company won the Workboat of the Year award in 2003 as the industry recognized this great achievement. The Company has sold approximately 130 of these high power fireboats since that time and just delivered their 10th FireStorm-70 to Corpus Christi TX, 2,902 Nautical miles by water.

The Company opened MetalCraft Marine US Inc in Clayton NY in 2007. Both partners believed that since they received so much revenue from US Customers it was only fair and reasonable that they pay taxes in the US. The Company now has two locations in upstate NY and over 50% of their employees are retired veterans. MetalCraft continues to grow in NY.

Our plan is simple, keep building better and better boats, always be fair and honest, look after your customers and the business will continue to grow by itself. Bob has been answering the phone at MetalCraft for 31 years and has no plans to change that. ‘We are blessed with the most wonderful customers and suppliers in the world, great employees and a great future, we have a lot to be thankful for.’

MetalCraft Marine has won Workboat of the Year honors several times and is nominated once again for its Innovative Design in its latest fireboat creation, the FireCat Monjed 2.

WorkBoat Significant Boats: Behind the Innovation with Ken Hocke