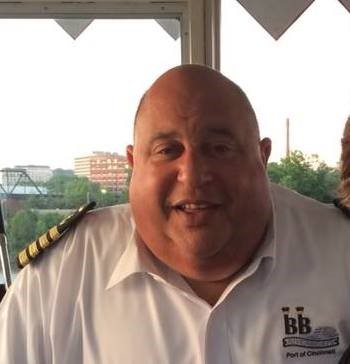 Captain Bernstein’s career in the river industry began in 1970 with a deckhand position aboard the Delta Queen.  In partnership with his father, Alan began the process of locating a vessel to start a new business venture, BB Riverboats. In 1981, Alan received his first Master’s license and has since upgraded and currently holds a Western Rivers 1600 ton Master’s license.  His credentials also include a 100 ton Inland Master’s License and an unlimited Master of Towing License for the Western Rivers. BB Riverboats operates two U.S. Coast Guard inspected riverboats, the Belle of Cincinnati and the River Queen.
Alan Bernstein was elected to the Board of Directors of the Passenger Vessel Association in 1982.  He served as President of the Association in 1988 and continues to be active in the association.  Currently, he serves as the Convention Site Selection Committee.  He also plans and orchestrates eight (8) meetings and conferences throughout the United States.

All presentations by Alan Bernstein

Safety On The Waterways